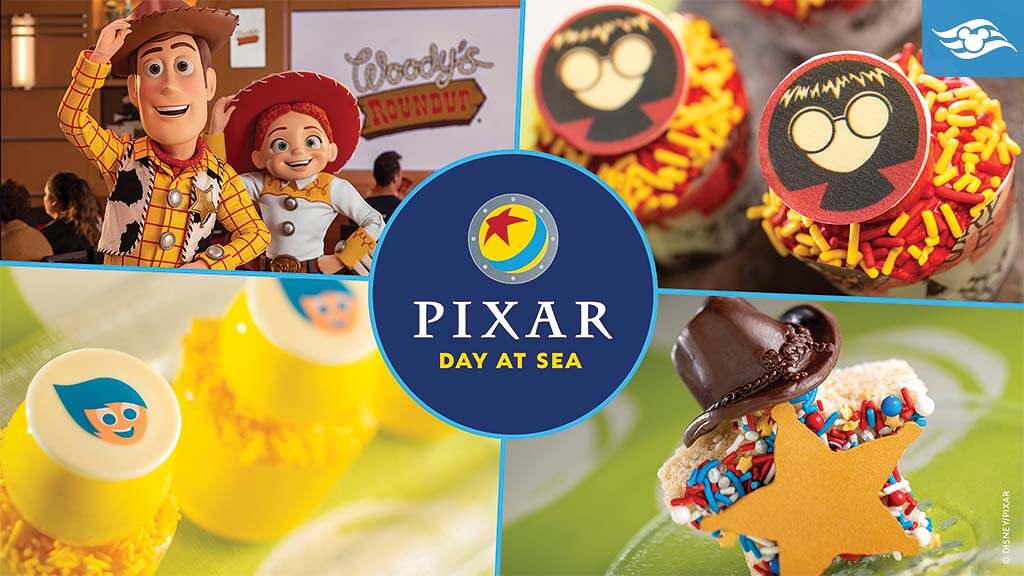 On the new Pixar Day at Sea coming to the Disney Fantasy in early January, families will be treated to a brand-new interactive breakfast with Woody and friends, sweet treats that are sure to bring “joy” to everyone and a dinner menu themed to the California roots of Pixar Animation Studios.

Breakfast with Woody and Friends!

He’s the rootinest, tootinest cowboy in the wild, wild West! That’s right, grab your cowboy (or cowgirl) hats for a brand-new interactive breakfast that will debut on Pixar Day at Sea. Themed to Woody’s Roundup in “Toy Story 2,” the “Hey Howdy Breakfast with Woody and Friends” will feature a cowboy guitarist, musical show moments and appearances from Sheriff Woody, Jesse and Bullseye.

Assorted muffins and pastries are just the beginning, as this new menu is filled with delights from top to bottom. Families can opt for pancakes, French toast or classic Mickey waffles fresh off the griddle; try the Prospector’s Breakfast Burrito (filled with potato puffs, sausage, scrambled eggs and cheddar cheese); or nosh on Bullseye’s Mini Pancake Tower with bananas, raspberry jelly, peanut butter and whipped cream. Lighter options include smoked salmon with cream cheese, onions and capers; chilled grapefruit; and a yogurt parfait or plant-based berry oatmeal parfait.

Three signature breakfast dishes are also part of the “Hey Howdy Breakfast with Woody and Friends” menu, including a buttermilk biscuit entree with sausage gravy; a plate featuring two fried eggs of your choice on hashbrown potatoes with chorizo; and a plant-based combo featuring scrambled eggs, sausage patties, pancake, hashbrown and grilled tomato.

Advance reservations are required for the “Hey Howdy Breakfast with Woody and Friends.” Guests can book up to 30 days in advance of their sailing, pending availability.

Speaking of dessert, with all the entertainment happening throughout Pixar Day at Sea, guests will need to keep up their energy – and these sweet treats should certainly help! Be sure to stop by Sweet on You for a multitude of dessert options that celebrate the beloved stories of Pixar films. The Joyful Lemon Cupcake will spark happiness with its lemon sponge and vanilla crème frosting, while the Toy Story Letter Blocks (chocolate blocks filled with mixed candy) and the Sheriff Rice Krispy Treats Badge will make the perfect Pixar pick-me-up.

Themed desserts will also be available in grab-and-go locations aboard the Disney Fantasy, including Cabanas, Cove Café and the concierge lounge.

In the evening, a new dinner menu with dishes inspired by the home of Pixar Animation Studios will be served at all rotational dining venues.

Highlights from the appetizer selection include a smoked salmon and smoked trout rillette or baked shrimp mac and cheese. A salad featuring fresh ingredients such as goat cheese, roasted yellow and red beets, pistachios and honey dressing beckon to studio’s roots in Emeryville, California. An array of main entrees will surely satisfy tastebuds after a day of Pixar-filled fun, including a seared grouper, Makhani butter chicken, beef tenderloin and cobb salad, while vegetarian options include a “Poke” bowl and vegetable tagine.

Of course, no dinner menu is complete without dessert accompaniments, and there are several — shall we say — incredible options to note! The signature dessert is a Playful Pixar Ball with baked vanilla cheesecake, blueberry filling and lemon almond cake, while other offerings include strawberry churros, a chocolate pot de crème, pink grapefruit almond cake, poached bosc pear almond tart and a chocolate fudge sundae.