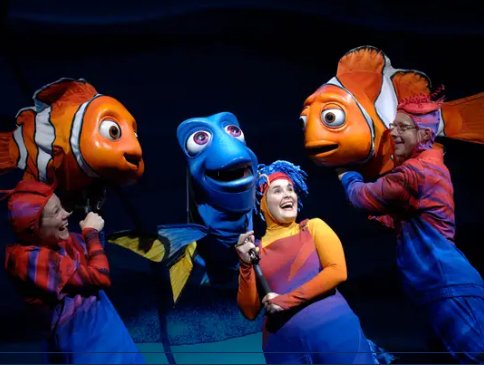 LAKE BUENA VISTA, Fla. (May 4, 2022) – Whether it’s the smooth harmonies of the Dapper Dans performing on Main Street, U.S.A., the action-packed thrills of “Indiana Jones Epic Stunt Spectacular,” or a warm hug from Anna and Elsa, live entertainment is filling every corner of Walt Disney World Resort these days.

New shows and experiences that debuted at the start of the Walt Disney World 50th Anniversary celebration continue to dazzle guests. These include two new nighttime spectaculars – “Disney Enchantment” at Magic Kingdom Park and “Harmonious” at EPCOT – and “Disney KiteTails,” which is performed multiple times throughout the day at Disney’s Animal Kingdom Theme Park. As “The World’s Most Magical Celebration” continues throughout 2022, welcoming back fan-favorite entertainment is one of the many ways Disney is continuing to add even more magic to the guest experience.

Here is an overview of new, returning and soon-to-debut entertainment:

Revisiting the Big Blue World
This summer, Disney’s Animal Kingdom will debut “Finding Nemo: The Big Blue… and Beyond!” marking the freshly reimagined return of one of its most popular musical entertainment experiences. This fully updated, 25-minute stage show incorporates live performers and puppets, along with many favorite production numbers from the original “Finding Nemo: The Musical.” In addition to a new script, the show features new set pieces with a fresh look, and a new LED video wall designed to visually extend the world created by the physical sets on stage – such as a 32-foot-long sunken submarine and a 15-foot-tall fish tank volcano.

Along with the much-anticipated return of the Pioneer Hall Players and cast members, the show will feature new updates to its script and scenery, while staying true to the hilarious, high-spirited family entertainment adored by generations of guests. Advance reservations are strongly encouraged and will be available on DisneyWorld.comstarting May 26.

What’s New and Next: Shows, Parades and Cavalcades
At Magic Kingdom, three exciting experiences recently made their return or debut:

At Disney’s Animal Kingdom, “Festival of the Lion King” inspires guests with its larger-than-life musical production filled with pageantry and puppetry. And this summer, two popular performances are set to make their much-anticipated return to the show:

Personal Interactions With Beloved Characters
As part of the recent phased return of traditional character greetings across Walt Disney World, guests can now hug Mickey Mouse, share a laugh with Goofy, and get autographs from their favorite Disney princesses. Here are just a few of the available character greeting opportunities:

‘Fantasmic!’ Set to Dazzle Audiences Again Later This Year
The iconic “Fantasmic!” at Disney’s Hollywood Studios will make its much-anticipated return later in 2022 with a new show sequence featuring Disney characters – Mulan, Elsa, Aladdin, Pocahontas and Moana – in heroic moments, as well as new technical enhancements. Guests won’t want to miss this spectacle set on a canvas of water where the forces of good and evil battle it out in Mickey’s dream. The extravagant, open-air nighttime musical boasts more than 50 live performers, massive sets, stunning effects, rousing music and dazzling pyrotechnics.